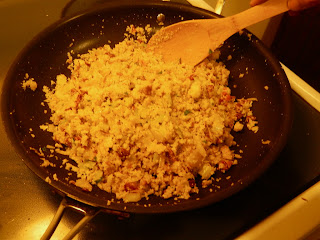 About 3 yrs ago, i ate a traditional Thanksgiving meal - and was promptly, and miserably, comatose on the couch.  I swore not to do that again.  However, i love the traditional foods.   But before i go there, how's your training going?!?!? I've upped my training big time because i'm convinced it will take nothing less to get back to the Games.  I'm one of those poor saps that earns a living behind a desk so i had to get creative.  I brought crossfit to my work - SO fun!  Training a hardcore group of guys and making up weird $hit since we train outside (often in the dirt).  For example: 200 m 90 lb atlas stone toss for time.  Try that one at your box :)  Or these babies - cannonball farmers' carry.

These are 90 lb stones, with a 7/8" hole drilled in them, and galvanized chain that attaches to rogue cannon balls.  Definitely a challenge to carry any great distance.  If you need to borrow them for any demolition projects, let me know. 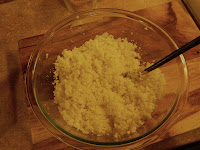 To start, chunk the cauliflower and put in food processor. Just pulse the processor until cauliflower has a consistency like rice.  I only do about 1/4 at a time - it's critical not to overdo it.  Then put the cauliflower in a bowl and microwave until it steams.  Again, don't overdo it.  We're just pre-cooking it but you don't want it mushy.  Next,  fry the bacon and remove from pan.  Divide the bacon fat into two pans. Pan fry the cauliflower in one.  While that's going, saute the mushrooms and onions in the other.  Slowly add in garlic and pecans.  When nearly done, add the celery for maybe a minute then combine all ingredients (including spices, parsley,  and crumbled bacon) in one large pan.  This would be an excellent time to add a few pats of butter and turkey drippings if you have them.  Enjoy!   Steve "Paleo"

Posted by Steve Parsoneault at 7:10 PM