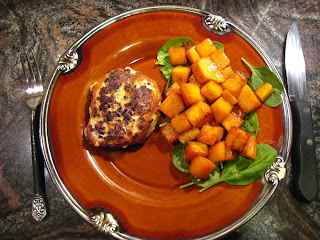 You may think i've gone off the deep end after you read this but I swear I'm sane. I have a thing for chocolate these days - darker the better. Chocolate doesn't GET darker than cacao nibs - they are just crushed raw cacao beans (which are actually seeds). Just for fun i bought some cacao beans because, geez, just sounded like a great snack food.
So here they are next to a quarter. I wouldn't buy them - they are "barely" edible. I just popped them in my mouth - there's a thin shell which didn't help the taste. If you peel them, they're better. I suppose if you covered them in chocolate like those almonds or coffee beans, they'd be the bomb. But these, um, crunchy bitterness.

BUT, that's just proof that it is possible to have too much of a good thing. So, why cook with this stuff? Well, if you google cacao and read up, you'd think it was a magic drug that hits you with magnesium, suppresses appetite, releases all kinds of feel-good chemicals in the brain (the "Bliss Chemical), blah blah blah - don't know if any of that is true. What i do know is that it imparts a rich, nutty, roasty, flavor to meats. So here's the recipe (I swear i've had these like 10 times now! - feeling so guilty not sharing! ) U can get cacao nibs at whole foods or online. They're pricey but we're not using that much.

Pound the chops out like this if you can.

Whip up an egg in a bowl, coat the chops, then sprinkle 1 tsp of cacao nibs on both sides like so... 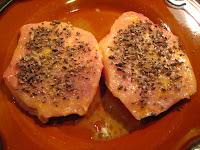 I know! Looks funny. Go with me ;-)
Prepare the butternut squash and get 2 tsp of olive oil going in a pan. Get the butternut going first. After 5 minutes, put 1 tsp of olive oil in another pan and, once it's hot, get the chops going. Add the agave to the butternut towards the end and sprinkle with cinnamon (soooo good ). Everything should finish about the same time. Throw some raw spinach on the plate to make your mama proud. Put butternut over the spinach, add the chops and you're ready to chow! Let me say i've made these chops with all kinds of spices - don't do it. The nibs will get lost. Just light salt and pepper work best. Then you will appreciate the roasty chocolate taste.
.......................
Sorry I'm not done :-) If you're just here for the PZ meals, skip the rest. I've been working with some people on "diets" and watching all the new paleo foods come out - which is awesome. There's been so much misinformation in the US about diet - it's hideous really (read "Good Calories, Bad Calories"). Now we've got some brave souls giving us options in the right direction - albeit for a little moolah but this IS America. HOWEVER, I'm not quite happy with some of the statements/direction that seem to imply U just can't go wrong on a paleo diet. Well it depends on your goals. Let's just say you're a crossfitter (might be a few of you out there ;-) You need power:weight - in other words, lean and strong. Will you get there eating strictly paleo with no portion control? Would not work for me. Is it true that you can't get fat eating fat? Not according to my bodyfat tests when i was eating too many nuts (full paleo btw). Granted, you will be better off eating paleo but sorry, paleo tells you what to eat, not how much to eat. Even cavemen were out to gain fat for the winter and the survivors did a good job of it. That skill was passed on to us. So, what do you do? Paleo-Zone of course. Zone tells you how much to eat. Sorry i'm not done ;-) cuz there's a loop-hole in the zone - it's called "double fat, triple fat, you're getting fat" In Barry Sears book, he says "..Truly elite athletes should consume two fat blocks for every protein block. Therefore, their ratio of protein, carbohydrate, and fat blocks would be 1:1:2" He previously states a fat block is 1.5 gm. So, a 1X fat zone meal would be 30.8%P, 39.6%C, and 29.7%F a 2x fat meal meal would be 26.8%P, 34.4%C, and 38.8%F. A 3X fat meal would have 46% fat - who needs 3X fat? Athletes at the top of their game i would guess. So, what are you eating? Check the math - fat is 9 cal/gm, carbs are 4 cal per gram, proteins are 4 cal/gm. There are some marketed "paleo" foods out there with upwards of 56% of their calories from fat. These foods must be for Olympians!! Now i'm not a dietician, nutritionist, or any kind of health specialist and I won't take credit for any Paleo or Zone theories. I'm an engineer that read most of the books out there and knows how to follow instructions and be exact. E-mail me if you need any help perfecting your diet - assuming your goal is a high power:weight ratio. Steve "Paleo"
Posted by Steve Parsoneault at 8:10 PM 11 comments:

How to make your own paleo meal-in-a-bag

Here's how you can make your own Paleo Fast-Food ;-)

Ingredients for a 4 block "meal":
4 oz of Free Range Bison turned into jerky (oh ya that's a Quarter LB of bison!)

Dried Bananas ~ 15 gm - WF sells them with nothing added. Go online too.
Dried Cherries ~ 10 gm - no sugar or sulfites.
Dried Mulberries ~ 10 gm - no sugar or sulfites. They are mild, slightly sweet, high in fiber.
Raw Almonds and Pecans ~ 12 gm (Costco baby!)
Gooseberries ~ 5 gm no sugar or sulfites. They are tart, sweet, and VERY expensive. They are also known as golden berries or incan berries. $24/lb at Whole Foods - not kidding.
Cacao Nibs ~ 5 gm no sugar or preservatives. This may be a debatable paleo food but you can eat it raw (in fact this IS raw), and it is 100% natural. Oh ya, maybe i should explain what it IS - this is what's used to make chocolate. They're broken up cacao "beans" - but BTW, they are technically seeds. I've been adding it to cookies and meats (believe it or not) It's kind of a nutty chocolate taste and is more dense in antioxidants than any other food - blueberries, acai berries, pomegranate - U name it. 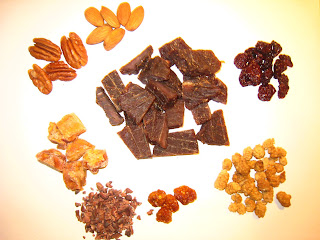 Where do ya get this stuff? Get together with your buddies, sisters, whatever, and order top-round bison from BuffaloGal.com There's lots of recipes for jerky. Replace the sugars with agave and maple syrup, replace the soy sauce with sea salt - about 1-2 tsp per lb of meat, and ramp the spices up a bit to account for the fact that the soy is gone. You can make it in the oven, lots of internet tips on that, or buy a cheapo dehydrator for ~$60.00. You'll have to pool your resources on the other ingredients too but a good one-stop shop is nutsonline.com. Bounce around the net for a bit and you'll find everything you need. The vacuum sealer is the bummer. The good commercial ones are expensive. But, you can go to Costco and buy the home ones. They work pretty good but you have to fight your way into the bag - no challenge for a caveman though right? Good Luck! Steve
Posted by Steve Parsoneault at 5:51 PM 3 comments: