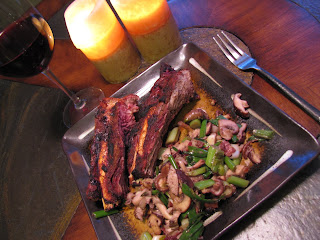 I have a ribs obsession, which i'll talk about more in a bit, but first a little on the Crossfit Open. I tip my hat to them - that format was bold and they took a lot of heat for it. I still would like to bitch. Crossfit HQ bowed to the general populous. Their goal was CLEARLY to not discourage people from crossfit, and show any ninny could do it. That bummed me out a little, but this IS a business after all. Geez i was hoping to feel just a little "F^cking Elite" but there really was none of that in the Open programming. In the end, i think they indeed rounded up the best athletes. Those that barely made it, or barely missed it (me), can argue but realistically their chance of winning THE GAMES are probably on the order of getting raptured to heaven. Looking at the Regional workouts, it seems more in line with what I consider crossfit and i'm happy to see that kind of programming. I'll keep paying my membership dues ;-)

OK, bison ribs. HOLY $HIT THEY SELL THEM AT COSTCO! Good call whoever is buying the meats there. Bison is expensive, after all, they can walk thru fences that keep lesser animals (beef) at bay, so sure, charge a little more. But seriously, the nice cuts are kind of ridiculous. Not ribs though - $20 for a HUGE rack. 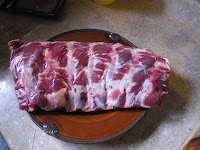 I have no idea if Costco outside of Boulder sells this stuff. If not, you can go on-line but they won't be nearly as reasonable.
Now about those egyptian walking huh? We have a great Farmer's Market here in Boulder and they caught my eye. 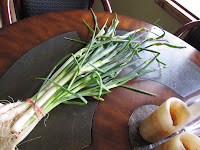 Basically HUGE scallions that form a bublet on top. As it gets heavy and falls over, it lands in the dirt and "plants" itself - so essentially "walking" across your garden. I also grabbed some mixed mushrooms while i was there 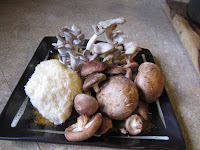 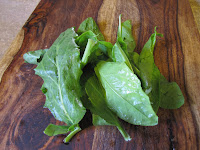 and sorrel - very lemony and tart. To be eaten in small quantities because it contains oxalic acid. As a garnish though, it really adds a unique taste (if you can't find it - just give the dish a squeeze of lemon towards the end). One more note about ribs. I'll say it again, i'm LAZY. I know some people parboil them and do a little dance, blah blah. Heck i'm so lazy I literally threw away ALL my socks and bought just woolie boolies three years ago. Hiking, biking, work, crossfit - whatever - SAME socks. Best thing i ever did. So, I really don't care if the meat falls off the bone, that's what teeth are for and this is WAY less work. Don't get me wrong - they're still pretty tender. Here's the recipe:

1 rack of ribs - dry rub with spices. Smoked Paprika is a "must have" spice. Besides that, i use garlic salt, onion salt, pepper, etc. Put on the barbecue - took mine about 1/2 hour or so.

Get 2 slices of bacon and cook it up. Put bacon to the side and saute ingredients above in the bacon fat. Start with the pecans - then add the rest. Salt and pepper to taste. It doesn't need much more - pretty rich. Just before it's done, add sorrel (just a few leaves chopped) and bacon pieces.
Enjoy! Steve "Paleo"
Posted by Steve Parsoneault at 5:10 PM 3 comments: