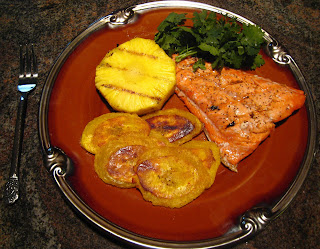 It was really hot in Boulder today so I wanted to cook all or most of my dinner on the bbq but grilled vegetables are kind of boring. Somehow, pantacones (NOT pantalones - those are pants ;-) came to mind. I had pantacones for the first time in Costa Rica. They are made from plantains. Green plantains are firm and starchy. Yellow ones are somewhat sweet and starchy. I bought yellow ones and i tried eating some raw. Not bad, but a little chalky (or maybe starchy). I'm certain the green ones are not good raw, BUT, I want to note that unlike potatoes, they are not toxic - valid paleo food. I should also say the carb content is pretty high (even higher than bananas if i believe the literature), but i don't concern myself with that. Why? I weighed them out man! I've never had a balanced meal, using whole foods, that gave me a blood sugar spike. Remember, it's the blood sugar spike that triggers the insulin response, fat storage, cholesterol production, blah blah blah. So, no spike, no worry. Traditionally, plantains are sliced, deep fried, mashed, then fried again. I knew this would be too much fat for a balanced meal so i figured a way to make them by putting them first on the bbq and then frying them in coconut oil. YUM! Coconut oil in a hot pan is darn near as good as bacon fat when it comes to filling the kitchen with heavenly smells. If you're the cook, put on your favorite tune and just stand in front of the pan when it starts to sizzle and breathe deep - it's awesome!

A paleo friend of mine turned my on to "Old Bay" it's celery salt and various kinda hot spices. It's sold everywhere. 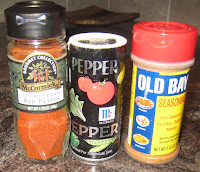 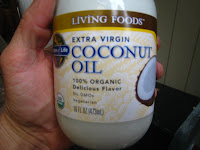 The coconut oil does bump the fat content of this meal up above my target - solely because salmon really does have a lot of fat. So the meal is high in fat by about 6 gms. If you want it better balanced, use halibut instead. I lean towards salmon because of the Omega 3's. Plus, i'm not in "lean-up" mode right now so i have to add fats.


Preparation:
Start with the plantains. Slice them like this and wrap 1 layer of them in foil **rub coconut oil on the foil so that NO bare foil contacts the plantains** - or they will stick. I double wrapped mine and put them on the bbq - low heat - 10 minutes/side. 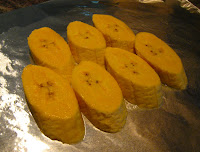 Leave the bbq on and remove the plantains. Take them out of the foil wrap and place them on parchment paper. Fold the parchment paper over so it's underneath and above the slices. Using any flat object, mash them down flat.

Put 1 table spoon of coconut oil in the pan and turn the heat on. Get the salmon and pineapple going on the bbq - pepper the salmon (black and cayenne) and use some of that "Old Bay", then put the plantains in the pan. They cook about as fast as the salmon so it should all be ready about the same time. 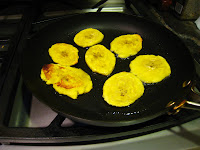 They are really good with a little salt and cayenne pepper. Now sit down and feel sorry for your non-paleo friends that are eating salmon and rice for the umpteenth zillionth time. :-)
Steve "Paleo"
Posted by Steve Parsoneault at 6:28 PM 5 comments: 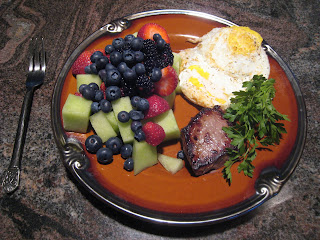 OK, I will get into this meal, but first, if you were at the Crossfit Games in Aromas last week, was that a phenomenal gathering of the world's scrappiest athletes or what? It was tremendously inspiring and motivating for me. No matter how hard i train, or how well i eat, i can always do better or do more and living in that environment for three days is just what i needed to push me to the next level. And for those that stopped me... "Hey, there's Paleo-Steve" ... thanks for chatting. Cool to have paleo friends :-). There's a CO games ("Colorado Open") Sept 12th - 13th at Front Range Crossfit in Denver - if you're nearby, participate or spectate, and prepare to be INSPIRED. I will be there for sure.

... I don't post too many breakfasts because they tend not to be so creative but this particular breakfast goes a long way towards explaining why there's absolutely no sacrifice to eating a paleo diet - I can't see who wouldn't be jealous of a meal like this. I also want to highlight bison - now that you can buy Bison NY Strip Steak at Costco, i'm calling it mainstream and one of the top choices for a caveman being that it's hormone free, antibiotic free, and free ranging. It is expensive at ~ $1/oz but what the hell, Lipitor is ~ $60/month and doesn't taste nearly as good! If you trim the fat, it's surprisingly lean at less than 2 gm fat/3.5 oz - and more than half of that is UN-saturated. This is way less than typical beef (although i'd like to see a side by side cube steak comparison), less than pork, and close or less than chicken - that according to highplainsbison.com. Is it true? Well, the cut i had was pretty darn lean, pretty tender , and had no obvious gristle. I did trim the fat around the edges. Of course, stone age man would have paid extra for that fat but then we are living in an "endless summer" and last i checked, Costco is open all winter so my survival is probably not at risk. Besides, i like my egg yolks! - and as you know, i'm all about a balanced meal. A friend of mine turned me on to parsley too - I especially like italian parsley and i've started to eat it in vast quantities. Try it.

oh whoops, breaking news. I ordered real RAW cashews from TheRawFoodWorld.com - the flavor is no different from Costco "raw" (actually steamed) cashews but the texture is different. They're slightly less crunchy and for some reason, they're 10-20% bigger than any cashews i've seen. Maybe they shrink when they're steamed out of the shells? They're about 50% more expensive than ordinary cashews - not really worth it IMHO.
Posted by Steve Parsoneault at 7:56 PM 1 comment: