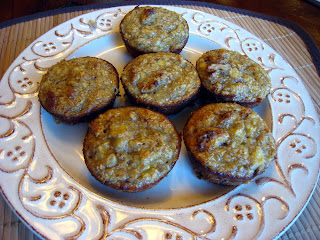 My daughter Chelsea just pulled this idea out of a hat one day and I was amazed how well it worked - you'd swear there was flour in these by the look of them. Talk about making a father proud! Probably the "last good idea" she'll ever come up with ;-) They're amazingly moist and taste like banana bread your mother would have made. They're quite simple - try 'em! 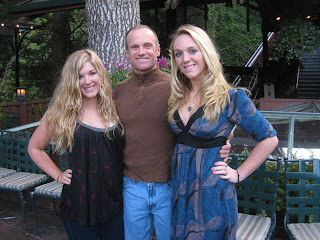 Posted by Steve Parsoneault at 7:48 AM 21 comments: 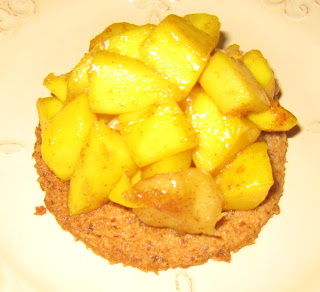 A few weeks ago I became obsessed with creating a paleo desert and I just started experimenting. I wanted some sort of crust or cookie thing with an original taste. Several experiments later, I came up with Steve's Island - named by my daughter. Chelsea's first comment after trying this desert went something like this - "Dad, this is probably the last really good idea you're going to have." With that, here's the recipe. [Note - this desert uses mangos and banannas - not really considered low glycemic, which is kind of my goal. However, as you'll see below, as part of a lean and low carb main dish, it is still "balanced". After eating paleo for awhile, if you blow it on carbs, you'll feel it. I've had this three times and my energy level after the meal felt rock solid each time - so for me, it passes the test. After you try it, check your own energy level and post to comments - I'd like to know if you agree.] 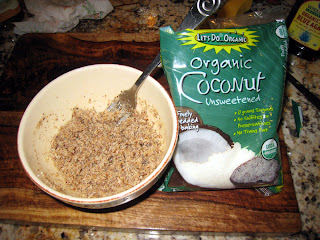 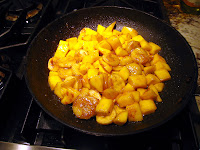 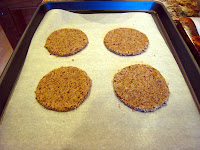 Topping
2 Cup diced mango – 56g C
1 Cup sliced banana – 34g C
2 Tbl Spoon Blue Agave sweetener – 32 g C
Cinnamon
Saute for a few minutes with just a little olive oil in the pan (U won't taste it). Add agave and cinnamon and saute about another 5 minutes flipping or stirring often. Place hot topping on coconut cookie and serve immediately (the topping alone will convert ANYONE to Paleo eating - I swear!). Makes 4 servings. For a balanced 5 block Paleo-Zone meal, precede this with 5 oz of lean meat and steamed vegetables (my last meal was 5 oz chicken and 7 oz steamed zucchini - total meal fat was high by just a few grams) The main dish needs to be low on carbs and fat for the proportions to work out. So far, we've been unable to NOT eat the extra servings... just saying ;-)
Posted by Steve Parsoneault at 7:56 PM No comments: 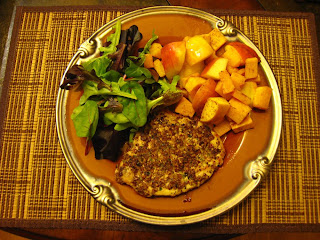 1st I've got to say that I appreciate all the feedback I'm getting on this site and at Crossfit NSC. BTW - don't hesitate to be critical too!
I'm a real fan of pork - it's cheap and pretty lean. Adding nuts gives it a little crunch and balances the fat out (assuming you trim off visible fat). I originally tried this dish with walnuts but they don't really add enough flavor. Pecans have a richness to them that works better. For the carbs I settled on my standard fare - butternut and apples - which I do not usually cook together but it sounded good. Now the cinnamon...I often put cinnamon with butternut and of course it's good on apples so I naturally added it to both. My daughter Chelsea says if you're gonna combine apples and cinnamon, then it better be in a pie - I stopped short of that. She actually thought I cooked the apples with pumpkin (not a bad idea AT ALL) and that I was just trying to heckle her by stopping short of TWO of her favorite pies. Honestly, the apples and butternut DID taste like a desert. Here's the recipe - enough for two 5 block meals. Very paleo and zone balanced (if you use your scale!). As usual, just throw in some extra nuts if you need more fat and scale the portions if you're not a 5 block "porker" like me. Oh BTW, you'll notice I'm including grams of Protein, Carbs, and Fat - That's total. So for example, the meal below is 10 blocks total, or two 5 block "meals". It is very slightly high on the fat - 4 gm/person. If you subtract the 4 gms, you're within 3% of 30/30/40 zone proportions - but geez, MAYBE some of that olive oil stays in the pan?? Oh and I better remind you, I DON'T count any protein in nuts or veggies because they are not sufficiently balanced in essential amino acids - just in case you're out to check my math/blocks/blah-blah-blah ;-).... if that all sounded like gibberish, just read on and EAT.

Preheat the oven to 400F and prepare the butternut (dice it) and apples (coarsely dice 'cause they cook FAST). Now the chops - I took boneless chops and pounded them with a "hammer" - it probably has a better name. I dive for abalone now and then and you gotta have one of these baby's, but if you don't, not a huge deal.(but you can buy one at any local dive shop and it REALLY works well - recommended).
Next combine chives (or green onions), pecan pieces, and garlic and chop it up real fine. See the pic. 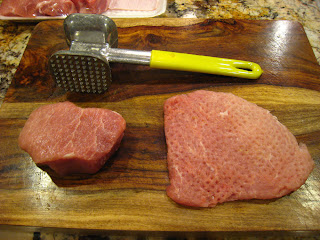 Whip the egg in a bowl, dip the pork in, then coat with the pecan mixture. 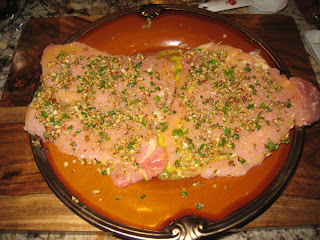 Get some non-stick spray onto your cookie sheet, spread the butternut out, spray a little on top, and start roasting - about 10 minutes. Add the olive oil to a large pan and start heating it up. Take the pan of butternut out of the oven after 10 minutes, add the apples and cinnamon, turn with a spatula, then put back in the oven. Start pan frying the pork now (assuming the chops are beaten flat - otherwise it's gonna be longer). You should be done in 'bout 5 minutes with everything. Throw some greens on the plate, the pork, the apples and butternut, and hope that you don't instigate and apple pie craving (it happened at my house)... enjoy! Steve
Posted by Steve Parsoneault at 8:00 AM 8 comments: 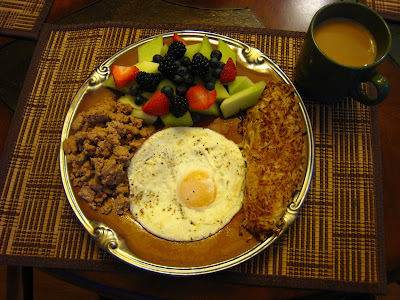 So like me you're all "sucked-up Paleo-addicted-never-gonna-eat-potatoes-again" right? Well, I hope you're sitting down. See the pic? Looks GOOD huh?
When I first started eating paleo, I started loitering in the produce section of the local grocery store and wandering aimlessly thru the farmer's market. I discovered "celery root", or celeriac, and I explicitly remember asking the vendor "What do you DO with this?". His answer was to cut it into slivers and add to salad. OK, not bad. Get's some strange looks from the kids though and it's almost a deal breaker if you don't go thin enough. Later, it occurred to me that maybe I could shred this stuff and make "Hash Browns". Here's the very simple "recipe" - I think they're WAY better than hash browns - they actually have some taste to them. My daughter Chelsea has had them twice now and still thinks they're good - and she doesn't pull any punches when it comes to such things..This is completely paleo-zone 5 blocks but the fat is high by about 8 gm (not even close to 2X fat for you zoners). Lean turkey breast would fix that but i didn't have any. 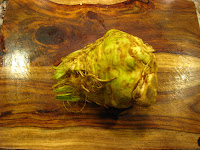 1st the root - it's not much to look at. I coarsely shave the skin off with a butcher knife - like so. 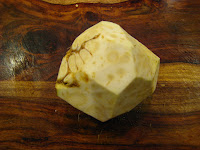 It's pretty obvious how to cook everything. I always prepare the fruit first to get it out of the way. Ground turkey was next then put to the side. The celery root was grated the night before. Get the olive oil nice and hot in a pan and add the root. After that's been goin' several minutes, I start the eggs. After I tried this, I googled it - couldn't imagine I was the first to think of this and sure enough, I wasn't. However, generally, it's suggested to mix it up with real potatoes because it kinda has a strong taste. I really didn't think so, plus I'm too "sucked up" to venture down the potato path. I'm sure this is gonna be a potato replacement for me in many dishes to come. You tell me if it's good just by itself. I think you'll be pleasantly surprised. Cheers! Steve 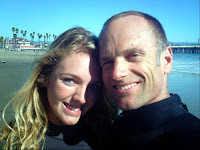