My dog is more PALEO than you 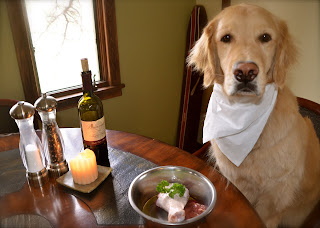 Yes, it's true. My dog Bear is more paleo than you. He eats raw, he eats the bones, and he doesn't gag on chicken liver. So why am i posting dog meals now? Well, just to get you thinking about your best friend. They're getting cancer and fat, just like us - makes you wonder huh? More about that in a sec.
So how did the Crossfit Open go for you. I was a nervous wreck the whole time. I thought the programming was good and the scoring was fair. If you're a data geek, check this post by my friend Mike Deskevich. Bottom line, he checked out various scoring methods and came to the conclusion that the method used is as "fair" as any. Not much movement in athlete placement at bottom and top - where it counts. I was very fortunate to qualify for the Crossfit Games in the 50-54 Master's group. My GF Laurie and I took off to climb in Spain for 10 days the week after the Open and now i'm in serious training/eating mode - as i know many of you are. My diet has evolved over the years, but if you're curious, i'm currently eating 150g P, 120g F, 80 g C per day. That's right - 1/2 my calories are fat and that will increase the closer i get to July.
OK - raw food diets for your dog. Do you know that corn is a primary (top 3) ingredient in most dog foods? Bear gets terrible "hot spots" if fed corn, and maybe your dog doesn't. But what's happening inside him? Let's face it, no one ever saw a wolf run down a corn stalk. This is not canine food (nor is it human food). So, what to do? There are many resources, so study up, just google "dog raw food diet." There are many myths out there, just like with human diet. The biggy is chicken bones. Cooked = No Bueno. Raw = Bring-It. It still freaks me out a bit because Bear pretty much inhales his food. Read up and use your own judgment. Chicken drumsticks are nearly small enough for him to gulp. The turkey drumstick he ate tonite forced him to chew and i felt a lot better about it. The other concern is bacteria, etc. Really? Raw chicken? Yes. I'm feeding Bear all "human grade" food and sure, there is still some risk of nasties in there, but hell, the bacteria in his gut could kick the shit out of Mel Gibson 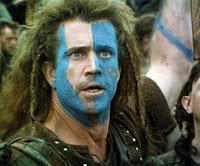 any day of the week. How do i know this? You'd be surprised what a dog wandering thru the woods will eat. Now you're wondering about the cost right? I did my research. Med quality food, like "Blue Buffalo" w/out corn cost $51 for a 30 lb bag. Seriously, that's redonkculous, but it gets worse. Bear eats 3 cups - that's $1.43/day. The "good" stuff, truly w/out any grains, is $32 for 11 lb bag - dog food for crying out loud! That's $2.40/day for Bear. What does raw food cost? Here's what i bought today. 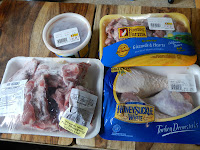 Pork Neck Bones $1.79/lb
Turkey Drumsticks $1.49/lb
Chick Gizzards/Hearts $1.21/lb
Chick Livers $1.24/lb
Avg Cost: 1.43/lb.
As a starting point, your dog should get 1 lb "meat" for every 50 lbs bodyweight. About 10% of that should be organ meat.( I also add olive oil to bring the fat up a bit.) That's about 1.5 lbs for Bear/day at a cost of $2.14/day. So not as expensive as "Top Shelf" dog food and much cheaper than Chemo. So, do a little research, and consider it. Do you really want your dog to be eating the equivalent of Cap'n Crunch? Not my buddy. If paleo is good for you, it's good for your dog.
Good Luck to all the athletes heading to Regionals and to the GAMES!