The Ever Elusive "Paleo Raspberry Crepe" 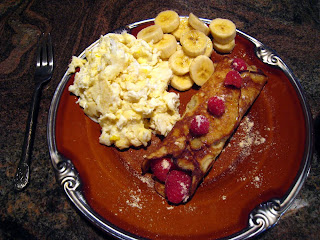 Funny thing... as i'm sitting here just spoiling myself on these paleo raspberry crepes, watching the snow fall outside, it occurs to me that we've entered into a kind of symbiotic relationship ;-) You all tune in now and then for PZ recipes and I eat like a king (umm... i meant caveman) in my effort to post recipes that are worthy - thank you. This blog turned into more than i thought it ever would. Well anyway, my daughter really enjoys crepes and we've been trying for some time to re-invent them using paleo ingredients - we nearly gave up. They were always kinda crumbly thanks to almond flour that i kept adding. Then i saw a recipe at www.freecoconutrecipes.com. I had to nix the whipped cream (darnit) and I made some other minor tweaks but dang if these aren't some darn good crepes! I can't tell them from the "real" thing. I hadn't heard of coconut flour until a few months ago - it's weird. Don't think you're just gonna substitute it for regular flour and be on your merry way - I think you could patch concrete with this stuff. But, use just a little, and it works magic. Here's that recipe. Fancy breakfast lovers shalt suffer no more....

Beat the eggs and the rest of the ingredients together. I don't have a sifter so i just put the coconut flour in a little wire gizmo ... 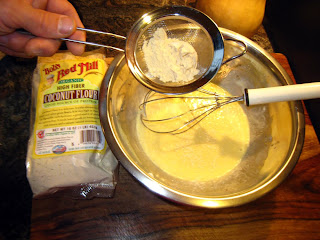 ... little embarrassed that i even have one of those ;-)
Melt the coconut oil in a nice non-stick pan and, after it's just melted, add it to the ingredients and mix well.
Pour 1/3 Cup of the batter into the hot pan and tilt the pan around so you get about a 6" diameter crepe. Now the hard part - flipping it. Honestly, i stopped trying to use a spatula. I shake the pan around a bit and just wrist flip it. This is very convenient if you're on a 2X or 3X fat plan cuz you get to eat your mistakes ;-) Wrap up 1/3 C of raspberries, sprinkle some coconut flour on top (this is for "looks"), and drizzle with 1/2 Tablespoon agave. Prepare to be impressed! ;-)

This is not quite balanced of course. For me, shooting for a 5 block breakfast, I added 4 oz banana and 9 egg whites to ONE of the crepes above. Believe it or not, this meal is 30:40:30 balanced (I know, hard to believe U can say that and "crepes" in the same breath!)

... now a little off-topic jibberish....on the importance of weighing your food. Recently I noticed i was feeling hungry a lot during the day and was having a hard time waiting for my meals (I try to eat one lunch at 10:00 and one at 2:00. Then i took a close look at my lunch and, SOB!, I was short-changing myself! Traditionally, I've kinda focused on protein and seldom short change myself there. Fats and carbs though, well they're bad right? ;-) I was getting skimpy on both. I got out the scale and started weighing again - now I feel better and can put the scale back for a bit. So, even if you went through the 2 weeks or 4 weeks of measuring your food, break out that scale now and then to make sure your eyeball hasn't gotten a little tweaked. Cuz, if you're doing straight PZ, relative to most people, you're on a low fat, low carb eating plan. Any lower, is not optimum, IMHO. 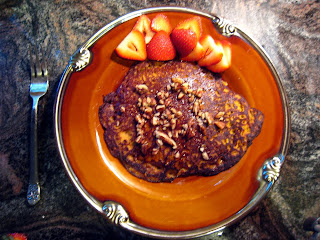 Who like's pumpkin??? :D I've been working with a number of crossfitters wanting to optimize their diet. A prerequisite for me, when i started this over a year ago, was that this "diet" has to be sustainable for life. My goal was to get off cholesterol medication - forever - so this wasn't a temporary thing. As a result, there were a few "must-haves" in my diet (although some of those must haves are starting to bite ;-). As i work with others, it's one of the first things I ask. So, you guessed it, pancakes are at the top of the list! One of my clients said she would try paleo pancakes (http://www.performancemenu.com/recipes) but *sigh* they couldn't possibly compare to pumpkin pancakes made by a local restaurant located near the birthplace of crossfit. I loved pancakes and i could probably DRINK pumpkin pie filling so the challenge was set!! This recipe, while high in fat, will not give you a carb hang-over. I would eat it on big exercise days when you need more fuel. For a 5 block meal, add about 6 egg whites/person and a little extra fruit. You will be seriously fueled for the "hunt". Enjoy this treat! It's perfect for a cool fall morning.

Coconut oil - for the pan

Mix everything up real good - sometimes that nut butter is clumpy - and make pancakes as usual (except you're gonna use the coconut oil in the pan) and add the pecans and maple syrup at the end. The recipe above makes 2 good size pancakes. Remember, for you 5 blockers, this is high in fat by ~ 30 gms, which is 270 calories - so, lift something real heavy a whole bunch of times, or go for a good ride, a long run, or a big hike and don't worry about it. If anyone would like help optimizing their diet, e-mail me - i enjoy doing it.
Eat Well! Steve "Paleo"
Posted by Steve Parsoneault at 7:42 AM 22 comments: