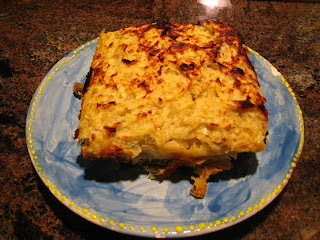 Now that fall is around the corner, it's time for a Shepherd's pie. I decided parsnips would be front and center despite the sometimes bad rap they get. Why? They have a glycemic index of 97 which is 3 pts shy of sugar! Might as well go stand in front of a speeding train loaded with insulin right? A Paleo diet is supposed to be low glycemic but these aren't so what's up? Well, glycemic index is determined by feeding individuals enough of a given food so that 50 g of carbs are ingested - that's a hell of a lot of parsnips! It's also the only food they ingest - no fats or proteins to slow things down. A reasonable sized serving of parsnips is about 80-90 gm, which is in the recipe below and is only 15 gm carbs. That's WAY below what I need to balance a 5 block meal. I had to chow some fruit on the side. The glycemic load (which takes into account normal serving size) is about 12 for that amount of parsnips (eating ONLY parsnips) or 1/2 what you'll typically see in pasta or potatoes. Ahaaa! This is partially due to substantial fiber in parsnips - about 5 gm in a 80 gm serving. This is 3X mashed potatoes. Now we're starting to get the complete picture. Parsnips have a VERY slight carrot taste and make a great potato substitute. My "kids" liked this shepherd's pie - it's mild and yummy. Give it a try - it's a winner and makes good left overs too. BTW - I used turkey for this one but any lean meat will do - ground round, bison, etc.

About 1 lb of fruit - like apples, pears, etc. to have as desert or on the side to balance out the carbs. Remember this is four 5 block meals. If you're a 2 block person (looking for 14 gm protein), you get 1/10th of the "pie" and about 1.5 oz of fruit (2/20*16 oz). Although, this brings up a different subject... In the book Lights Out: Sugar, Sleep, and Survival by T.S. Wiley, it is suggested that when the days shorten, we should cut our carbs back further because "back in the day", that's what happened, and this helped to deplete stores of fat, cholesterol, etc. Interesting concept - i might try it. What's my point? Maybe being a little shy on carbs as we head towards winter is not such a bad thing. 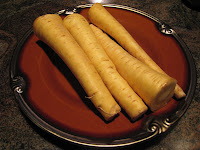 Preheat oven to 450F.
Peal and grate the parsnips with a cheese grater. Add onion salt and olive oil and set aside.
Slowly cook the bacon slice - remove bacon strip and DO NOT throw out the bacon fat - leave it in the pan.
Pan fry the onions, turkey, Italian Seasoning, and onion salt - do not over cook. We're gonna cook it some more. Pepper to taste.
Prep the zucchini, mushrooms, and celery and saute in the bacon fat - do not over cook.
Combine meat and veggies in one pan and mix thoroughly. Let cool down a couple minutes. 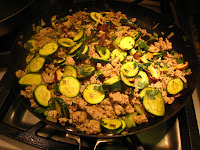 Take 4 egg whites and cilantro and mix them into the meat/veggies.
Take other 4 egg whites and mix with parsnips.
Get an 8X8 metal or pyrex pan and spray bottom with olive oil. Add meat and veggies then cover with parsnip mixture.
Don't smooth tops of parsnips too much - browns better if you don't.

Cook in oven at 450F for about 25 minutes or until top start to brown. I like to put my oven on broil for the last minute so the top is nice and crisp. Sprinkle twith chopped bacon. This dish tastes like "comfort food" - you're gonna like it ;-)