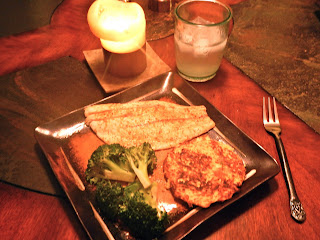 I didn't even know what a latke was a month ago, and i probably still don't, but the texture and smell of these is becoming a quick favorite. First though, CROSSFIT OPEN coming down the pipe! Ready? I cranked down on my macronutrients a month ago and quickly dropped about 7 lbs. The least i can do is not give anyone else advantages in the bodyweight exercises. I actually started weighing and measuring again - for a bit. I'm reminded what a fat-fest this paleo stuff has become. Touchy subject i know but look around you. Who's paleo and who's shredded? Why and why not? I'll tell you why - it's a fookin nutbutter fest out there. And that's not all, there's a zillion almond flour recipes that are DAMN good. Like paleo bread and ginger snap cookies. (not joking here - MAKE these) If you have glutton (not gluten) tendencies like me, you need to do a little math on this stuff, or risk getting soft. Don't get me wrong, a 5 lb sack of almond four landed on my porch a couple weeks ago. There's not doubt that eating like a pig is anabolic. You WILL lift more weight but those burpees are gonna SUK. Better to train like a plough horse and eat like a race horse. For those interested, i'm on about 18 blocks but i'm skimping carbs - close to 100 gm per day. For an averaged sized male crossfitter, this is a pretty bullet proof way to lean up - so get on it and good luck during the Open! 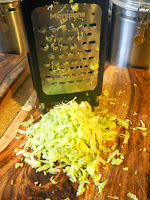 Mix in the egg, flour, and spices and get the coconut oil heating in a pan on med-high. Divide the shredded brok mix and place in pan - flatten out. Start steaming the broccoli florets and get the baramundi going in another pan coated with olive oil spray. Flip the latkes - they should be crispy brown like hash browns. 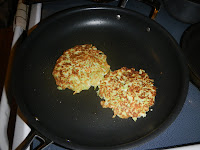 A little smear of butter goes a long way on those latkes! Eat Well! Steve "Paleo"
Posted by Steve Parsoneault at 9:19 AM 1 comment: