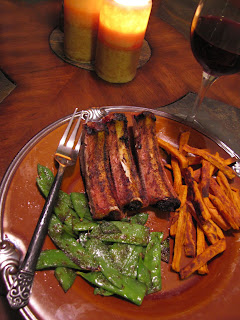 This is just good comfort food and if you're a rhubarb fan, you're in for a guiltless paleo feast. First a word about spices - don't be cheap. Find a spice shop, virtual or brick 'n mortar, and get the good stuff. I did recently, and man it makes a difference. You'll see I included shallot salt - awesome stuff but you may not find it at your local haunt. Smoked paprika is another one - get it. You might spend a little more but remember, it cost less than open heart surgery so splurge a little - money well spent. This meal is close to 5 blocks (ignore the wine - more about that later). I can't figure exactly how much fat and meat in on a rib - i don't have a calorimeter dang it. 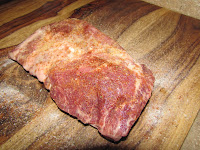 About 6 pork ribs - i buy the stuff from Costco. Get higher quality if you can.
Dry rub them with shallot salt, lemon pepper, smoked paprika, garlic powder, and celery salt. Get the barbecue going.
Now slice 8 oz of sweet potato ( I like the garnet ones). Melt a about a tablespoon or so of coconut oil and coat them with it. Arrange on a baking sheet and sprinkle with shallot salt, cayenne pepper (not too much), and sea salt. Get that oven pre-heated to 425F. 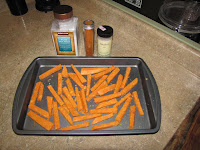 The ribs and sweet potatoes took about 30 minutes for me - so i would start them at the same time. When they're nearly done, get about 3 oz of snowpeas, spice 'em up, and saute in a little coconut oil. Now about that wine! I don't normally plug wine. It's debatable (but arguable) paleo food. However, health-wise, few debate that a little red wine is good for you. 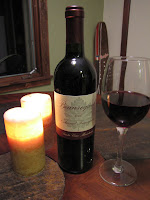 I paired a 2006 Beauregard Cabernet Sauvignon with this dish - FANTASTIC. I know Ryan Beauregard - he's out in California, not paleo but he LOOKS at bit paleo ;-) Either way, he makes great wine and he ships it Beauregard Vineyards
I know you've been patiently waiting for desert - here it is...