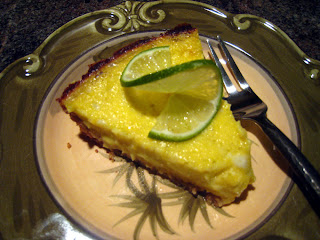 This recipe seemed criminally obvious when i first thought about it, however, it took a little doin'. BUT, before I go there... Want to give a shout-out to Crossfit Verve - Matt and Cherie (think "6 Million Dollar Man" meets "GI Jane" - and you'll already have a good picture), with the help of many generous volunteers, ran the Mountain Sectionals in Golden, Colorado - it was a fantastic event with clever WODs and camaraderie in abundance. Matt Chan is the kinda guy that, if he's NOT your friend, you WISH he was. Just a solid friendly dude with an easy smile. He gave the Sectionals a family feel, like you were surrounded by brothers and sisters - he's really the epitome of a crossfit athlete. And Cherie, Whooa! Unfortunately i did not see her judging because she is truly amazing. That girl can guaranteed yank a PR out of you, with forceps, rubber boots, and a stiff heel if she has too ;-) She is incredible - seriously. What a dynamic duo they make. I have yet to leave a Crossfit competition with out feeling inspired and encouraged and this one was no exception - so THANK YOU Matt and Cherie - it was memorable.
Macro-Nutrient Cycling - well i better give a quick update on this.. I only lasted 6 weeks :-(. I wasn't getting the results i expected (ie buy new shirts cuz gettin SO massive) and, umm I'm a fruit junky - apparently. Also, the load meals were painful - not something to look forward to. In defense of Faigan, I really couldn't load as he described - mostly starchy carbs. I was just too uncomfortable. I also tend to do some very long duration med-intensity stuff on weekends (backcountry splitboarding) and i just couldn't hang with the super low carbs while humping my pack up to 11,000 ft. I WILL say it leaned me out pretty quick,i felt fine during WODs, and i added 25 lbs to my dead lift. I know i'm just N=1 and some people do better on lower carbs overall and dig chowin macnuts & avocado all day (actually, seems like MANY people) - just not optimum for me. So, i'm back to standard 5 block PZ meals... well, AFTER these key-lime pie trials! Who knows, i may dial back the carbs just a little going forward... OK.... ON with it already...
Key Lime Pie - normally it's made with a graham cracker crust (crushed graham cracker, sugar, and a lotta butta). Which forces me to ask "What the hell IS graham?" That's the first clue you shouldn't be eating it btw. It's "fine ground white flour with coarse ground wheat bran and germ" - according to Wikepedia. Scary - I really had to look it up. Graham crackers have a high glycemic load - right up there with coke and vanilla wafers. Maybe something to be avoided unless you think "metabolic syndrome" sounds like a good time ;-) Another common ingredient in KLP is sweetened condensed milk. Coconut milk to the rescue... 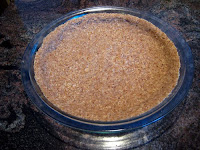 Crust:
1.5 cups whole almonds
4 pitted dates
1 Tablespoon Coconut Oil
(I didn't make up the date part.. here's some paleo crust recipes)
Put it all in a food processor and stop just short of nut-butter
Dump it into a standard pie pan (smear with coconut oil first) and, with your fingers, just mush it flat. Don't bother going all the way up the sides with it - though a visible crust looks good, you have to worry about it burning in the oven - too complex for a lazy caveman. Form the crust so it goes about half way up the sides. Pre-bake at 350 for 6-8 minutes - should be just a tad golden. 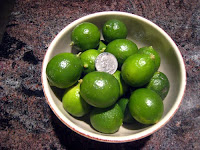 Filling:
4 teaspoons lime zest (you know... get the grater out)
1/2 Cup lime juice (fresh of course)
3 Tablespoons agave syrup (can use honey)
2 Tablespoons coconut flour
3 eggs
1 Cup Coconut Milk (Thai Kitchen brand recommended)
Get a whisk and mix it up real good. When pie shell is done, dump filling into shell and put back in oven for another 25-30 minutes (filling should appear to be set up). Hopefully the crust is actually covered. If not, don't let it burn - cover with foil near the end if you have to.
Key limes are these itty bitty limes that are slightly better than real limes but WAY more work. I used 20 to make ONE of the pies - fairly redonkulous. Even then i needed extra limes to get more juice. I swear more seeds than juice came out of some of those little buggers. I would buy 3 as "evidence" but use regular limes instead ;-) I made it both ways -hardly tell the difference. This pie really needs to cool and IS better the next day but i'd be a hypocrite if i told you to wait.
I'm embarrassed to say i've had this every night for the past 4 nights! For a 5 block meal, it's quite reasonable to combine this with a good portion of veggies and some lean meat. I hope you enjoy it as much as I have. It kicks A$$!
Eat Well! Steve "Paleo"
PrimitiveFoods.com
Posted by Steve Parsoneault at 7:47 PM